The blessing was led by Dona Nenita Floirendo and his sons Antonio “Tony Boy” Floirendo Jr. and Ricky Floirendo, chairman and senior vice president, respectively of the Anflorcor Group of Companies.

Also present were Anflocor president Alexandar Valoria, Vincent Floirendo, Board of Directors Marissa Floirendo and Linda Lagdameo, Vice-President on Corporate Affairs Maricris Brias and Davao del Norte 2nd District Representative Anton Lagdameo, who even helped Fr. Jobel ride at the back of the horse to bless the whole race track with his holy water.

“We are truly blessed that we have this one of a kind world class oval here in Davao, which is the first outside of Manila” said Davao Horse Club president Mike Dizon.

“San Antonio Park is a 2-kilometer oval race track that can give the Sta. Ana Race Track in Carmona, Cavite a run for its money,” Dizon added. 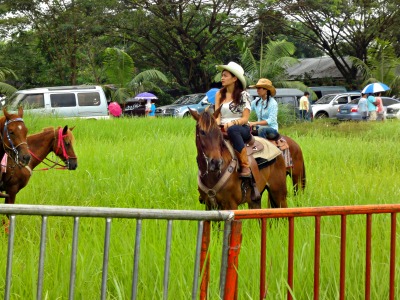 The Floirendos also own the Empire Joy Stud Farm inside the Nenita Farms, which have been breeding pure Thoroughbreds (race horses) of famous winning stock from England, US and Australia in the same property that rolls gently up to the foothills of Mt.Talomo for 40 years now already.

The blessing of the San Antonio Park also coincided with the opening of the “Kadayawan sa Nenita Farms” Agri-Business Fair that showcased all the companies managed or invested by Alflocor.

Nenita Farms is now also opening its Malayan Guest House to the public which is a good venue for weddings and birthday parties. (PNA/hbc/ASA/Lolito T. delos Reyes/ldp)