Off the Grid on Negros Occidental’s Danjugan Island

Can you survive a vacation without electricity?

A marine and wildlife sanctuary within a 43-hectare island situated in the Sulu Sea is encouraging visitors to get as close to nature as they possibly can, minus modern conveniences.

Danjugan Island, which is four to five hours away from Bacolod or Dumaguete, is described by its executive director Dave Albao as a private conservation site and marine protected area. In other words, definitely “not a resort”.

It is managed by the Philippine Reef Rainforest Conservation Foundation Inc. (PRRCI), a non-government organization led by Gerry Ledesma who bought the island in 1994 for preservation. Ledesma saw how the reefs were slowly experiencing degradation and wanted to prevent further damage.

The island has five lagoons and is covered with limestone forests which is home to over 74 bird species, 10 bat species, 579 fish species and many other wildlife species such as corals, turtles, snakes and the rare coconut crabs.

Among the island’s star attractions is its lone Beach Stone-Curlew or Beach Thick-knee, a grey-brown shorebird with a massive yellow-based bill and thick knees—thus the name. It can be found across Australia and a few other Asian countries including the Philippines.

The Beach Stone-Curlew is a rare bird, so rare that been tagged as ‘near threatened’. Albao said that Asian tourists would even fly to the Philippines on a weekend just to see the bird, take photos and fly back home.

Visitors that first set foot on the island will immediately feel peaceful as it only welcomes more or less 50 guests excluding its 10-member staff. It’s the perfect hideaway from the hustle and bustle of city life. 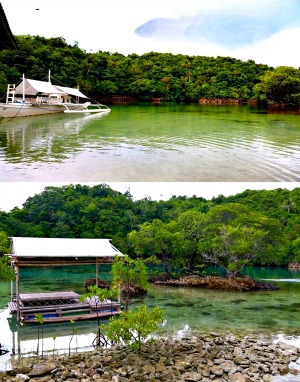 Modern conveniences such as cell service, television and running water will not be part of the Danjugan Island experience, Albao said stressing that people rely solely on natural entertainment and human interaction.

If by chance a part of the island does have cell service, visitors will have trouble charging their gadgets as the island uses solar power to run lights while water is usually brought from the mainland, he explained.

The island offers simple accommodations in either the Moray Lagoon Camp or Typhoon Beach Camp. Air-conditioning units are non-existent and visitors will also be given just a bucket of water to bathe in.

Albao said that the island is heavily dependent on tourism as its source of income, which is used to further preserve its biodiversity. However, he said that the priority was still conservation and not the entertainment of visitors.

Of course, visitors will have enough activities to keep them preoccupied such as boat-trips, island tours, snorkeling, kayaking to name a few. It’s a favorite among yogis and quiet-loving individuals.

A number of marine and wildlife summer camps are also held to educate elementary and high school students of Southern Negros communities through its Danjugan Island Environmental Education Program (DEEP).

With seven different types of ecosystems— beach forest, mangroves, lagoons, bat caves, coral reefs, seagrass beds and an open sea— students who aspire to be future ecologists and biologists have the best classroom to learn in.

Those who have been to the island before would say that it receives far less attention than it ought to receive, but they also agree that it only adds to the mystique that surrounds this hidden gem in the Sulu Sea. (PNA)BNB/Azer N. Parrocha