All Set for Dagupan Bangus Festival 2014

All is set for Bangus Festival 2014 slated from April 1 to May 1, except perhaps for a few last-minute changes in schedules.

This year's festival has Mayor Belen T. Fernandez as honorary chairman and lots of fun and activities are expected. But the event to watch is the "Festivals of the North" which return after three years of absence was assured by no less than Mayor Fernandez.

City Tourism Development Coordinator Sharon M. Maramba said the towns of Anao, Tarlac and Bangued, Abra are the latest local government units (LGUs) to have signified their intention to join the "Festivals of the North" set on April 27.

The others are from Caoayan, Ilocos Sur; Laoag City; Masinloc, Zambales; and Candon, Ilocos Sur including Lingayen, Tayug and Binmaley, known for their famous Bagoong, Laylayug and Sigay Festivals, respectively.

“As the Bangus Festival comes nearer, we are expecting more contingents joining and we will surely be thrilled by the performances of the different contingents in the Festivals of the North including our own,” said Maramba, speaking during the Executive Session called by Mayor Fernandez,

The Dagupan Bangus Executive Committee said the newest events added are the Tri-Bangus Triathlon Race on the April 13h, Seafood Festival on the April 25 and International Cook Fest set on April 28 featuring the first of its kind Bangus Cuisine International or "Bangusine".

Based on the approved schedule, Bangus Festival 2014 will formally open on April 22 with the holding of Gilon-Gilon ed Dalan, the winner of which will automatically represent the city in the Festivals of the North. After this will be the GMA Kapuso show to thrill Dagupenos and their visitors.

From April 1 to 3, local and national artists in theater and visual arts will show off their talents as they will compete in the Fun Fiesta sa Pilipinas 2nd National Performing Arts Festivals organized by the Philippine Arts and Culture Educators Society (PACES) at the CSI Stadia. 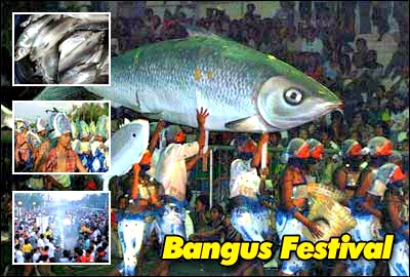 Visitors will also have a chance to taste local delicacies and other products that are proudly made by Dagupeños who have been trained by the city on various livelihood projects in the One Barangay, One Product Fair from April 1 to May 16 alongside with the Trade Fair and Baratillo in selected streets of the city within the downtown area.

Dog lovers will also showcase their pets in the Pets Day and Dog Fashion Show 2014 at the CSI Atrium from April 4 and 5 while ABS-CBN will hold its One Kapamilya Run along the De Venecia road on April 5 and its Caravan at the Pantranco Old Terminal on April 12.

Meanwhile, fisher folks will have a chance to further enhance their technical know-how in raising, processing and in packaging bangus during the Bangus Congress on April 23 together with the Department of Trade and Industry and the City Agriculture Office at the Star Plaza.

From April 23 and 24, sports enthusiast will have a chance to see actions in the National Karate-do Tournament at the CSI Atrium while bangus growers and consignaciones will outwit each other in the Bangus Rodeo Competition at the Magsaysay Market on April 24.

On April 25, balikbayans will be treated with seafood delights in the launching of the Seafood Festival at the city plaza during the Balikbayan Nights.

From April 25 to 29, dancers will have a chance to further enhance their talent during the National Dance Convention organized by the Dance Educators Association of the Philippines (DEAP) at the Astrodome and CSI Stadia.

April 26 will be Kapuso Mall Show and National Taekwondo Tournament at the University of Luzon.

April 29 will be Pigar-pigar Day at Galvan Street and April 30 will be the Kalutan ed Dalan (Bangusan Street Party) and Splash in the Sky at the De Venecia Road.

The Bangus Festival will culminate on May 1 with a Mass at Bonuan Tondaligan and a fluvial parade. At nighttime, beach-goers will have a chance to watch the Ms. Gay Pageant and the Dagupan Beach Body in a Beach Party at Bonuan. (PNA)LAP/Leonardo V. Micua/lvmicua/rma