The Embassy of the Czech Republic on Wednesday opened its new visa application center in Cebu City, in partnership with VFS Global, an international outsourcing and technology services specialist for governments.

“The launch of the Czech Republic Visa Application Centre in Cebu City reflects the [Czech Republic] country's genuine commitment in continuing to bolster people-to-people network between our two friendly nations through tourism, business and culture," said Czech Ambassador Jaroslav Olša in a statement.

"As a result of this policy, the Czech Republic will continue to emerge as one of the top European destinations for Philippine tourists," he added.

Olša said the newly-launched visa center will accommodate the growing demand for visas to different Central European countries among tourists from the Philippines, particularly those going to the Czech Republic.

The event was organized by state-run agency CzechTourism, in partnership with travel company Rajah Travel. 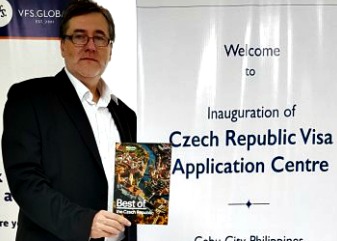 “The issues we continue to face in some OFW markets, such as those in the Middle East and in the United States, for example, because of its tighter immigration policies necessitate that we look for other OFW destinations. Worker migration for Filipinos is already a way to a brighter future, so as licensed overseas employment providers, we ought to do our share in searching for employment opportunities,” PASEI president Elsa Villa said in a statement.

Villa, together with members of the association, is set to hold a four-country Europe mission to showcase to European companies and employers the professional capabilities and occupational skills of Filipino workers.

“The European labor market is huge and the economies of many European countries are exhibiting spectacular growth, with some already feeling the pinch of labor shortages due to declining and aging population," she said.

"We at PASEI believe that Filipino workers can get a bigger share of the foreign migrant workers demand in the region, hence, this marketing mission."

The first stop of the 22-member mission will be the Czech Republic where members will meet with Czech chambers of commerce and industries and foreign recruitment agencies.

According to labor market information reaching PASEI, Czech companies have signified to hire more Filipinos this year, particularly industries on electricity, gas and water, wholesale and retail, hotels and restaurants, and construction.

The Czech economy is experiencing a boom, as well as labor shortages in highly-skilled workers.

After Czech Republic, the mission will be in Poland. At present, there is an estimated 500 Filipinos in Poland, mostly employed in the banking, religious, food, wellness, and domestic work sectors.

Philippine Ambassador in Warsaw Ann Patricia Paez has arranged for this trip a business matching session for the PASEI delegation.

After that, the PASEI mission will be in Germany, Europe’s powerhouse economy which is in need of more healthcare workers.

With the Philippines and Germany having the "Agreement Concerning the Placement of Filipino Health Care Professionals in Employment Positions in the Federal Republic of Germany" or Triple Win, the PASEI mission will explore strategies and programs to fast-track private sector participation in the deployment of Filipino nurses, caregivers, and other healthcare workers to Germany.

Aside from the introduction of Filipino capabilities in various industries, PASEI said the 19-day trip is also aimed at familiarizing its delegate-members with worker migration policies in the four countries. (PNA)