Just like in the leading character in the recent popular Filipino soap opera in television, George Vacal Paraliza returned to the Philippines after working abroad.

They envisioned setting up a company that would produce premium coconut wine and be a key player in the global wine industry.

“My wife, Tila, and I shared a dream to create a legacy for our family so we founded the DJCRATER, Inc. after I retired from a rewarding career in an oil company in the United States of America,” Paraliza said.

Paraliza was born in La Paz, Leyte and educated in Cebu City. While working abroad, he spent his pastime making wine.

“We first established the winery on August 2010 in Tacloban City, Leyte, and named our product Vino de Coco in April 2011,” Paraliza said.

Vino de Coco (Spanish term translated as coconut wine) is produced from the fresh sap of cut flower buds of the coconut tree. Farmers harvest the blossoms of a coconut tree. They make a cut on the blossoms, and the sap starts to flow from the cut. 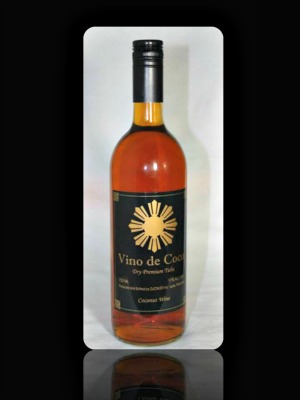 The sap is then collected in containers. The collected sap, which is translucent and with about 80 percent water, is naturally fermented into wine with 11 percent alcohol content.

“Farmers use the educational guidelines for responsible farming developed by the Philippine Coconut Authority and the Department of Science and Technology to harvest the sap from the blossoms of coconut trees. To ensure the quality of fresh sap, strict controls are implemented in collecting and processing the coconut sap to wine,” Paraliza said.

“For centuries, coconut wine has been enjoyed here in the Philippines but it was not given the refinement it merits until now. Our wines are endowed with the aroma, flavor, and sophistication that will upgrade the current quality of the country’s coconut wine to meet international standards,” Paraliza said.

To promote these products here and abroad, Paraliza’s company participated in local and international trade shows facilitated and organized by the Department of Trade and Industry (DTI). The company have recently displayed their products in the regional trade fair dubbed as Bahandi (or treasures) 2012 at the Megatrade Hall, SM Megamall in Mandaluyong City, and the trade exhibit during National Export Congress at the Philippine Trade Training Center (PTTC) in Pasay City. It will also participate in the IFEX Philippines, Asia’s ethnic food and ingredients show at the SMX Convention Center in Pasay City on May 16 to 19, 2013.

“Early this year, our company already got a licence from the Food and Drug Administration (FDA) Philippines to operate as a food manufacturer and exporter having complied with the prescribed requirements.” Paraliza said.

At present, the company started exporting to Macau last October 2012. It is targeting to export in countries such as Korea, Japan and China, and has initially sought the assistance of the Bureau of Export Trade Promotion (BETP).

“I believe that the production of coconut wine is a big boost to our coconut industry. It provides opportunities for our coconut farmers to earn. In line with this, we intend to expand our operation and marketing through our distributors, and further develop coconut sap collectors through strict farming guidelines to increase employment in the Eastern Visayas,” Paraliza said. (DTI)