City of Dreams Manila’s three signature restaurants — Crystal Dragon, Nobu Manila and The Tasting Room – were recognized by the luxury lifestyle magazine Philippine Tatler as among the Top 20 restaurants in the country.

Three other restaurants at the property, namely Red Ginger, The Café at Hyatt, and Apu are also among the 170 establishments in the country that are listed in the recently released Philippine Tatler Best Restaurants Guide 2016.

The Best Restaurants Guide (BRG), already on its twelfth year, has delivered comprehensive reviews of the most outstanding local restaurants from across Metro Manila and in key cities, based on four categories: Setting, Food, Wine, and Service.

The Top 20 were voted by the BRG editorial committee after deliberations drawing from reviewers’ ratings and readers’ choices.

The award, which honors our talented culinary and service teams, is especially meaningful to us as we celebrate our first anniversary this month.

We thank Philippine Tatler and the panel of reviewers who are among the city’s most discerning and fastidious food connoisseurs for this distinct honor.”

The venue’s well-loved degustation experience, particularly the six-course Chef William’s Mood, the all-time favorite 52 Degree Egg, Wagyu Beef Tenderloin, and Smoked Salmon, are some of the highlighted dishes in the Best Restaurant’s Guide. 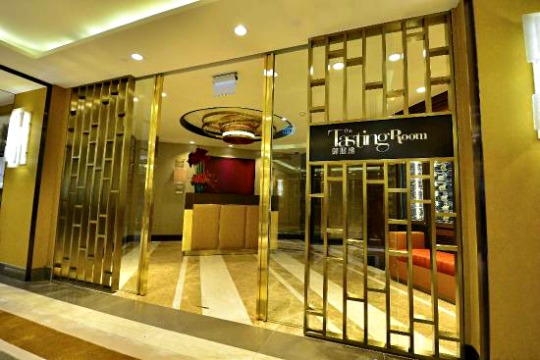 Nobu Manila
With the announcement of the first Nobu Hotel in Asia came the first Nobu restaurant in Manila, a Japanese-Peruvian concept made famous by Chef Nobu Matsuhisa. The Nobu brand has a reputation consistency throughout its 33 restaurants around the world, and Nobu Manila is no exception. Classic dishes such as Black Cod Miso and Rock Shrimp Tempura, complement well-loved items Nobu Crispy Rice with Tuna, Nobu-Style Tacos and Suntory Whiskey Cappuccino.

The Café at Hyatt
The Café at Hyatt offers an extensive buffet selection which has six stations: Italian for pizza and pasta; Grill & Griddle for meats and all things roasted; Japanese with an assortment of sushi, sashimi and more, lined next to a selection of Asian and Western Salads, fresh fruits, Cured Meats and Cheeses; Asian Noodles & Dimsum; Fried Foods; and an abundant array of desserts.

Apu
The Filipino restaurant Apu is one of the independently operated restaurants at The Shops at The Boulevard on the Upper Ground level. Apu showcases a modern approach to beloved Capampangan specialties, and prides itself in its Gambas Aoli, Seafood Kare-Kare, Sizzling Sisig, Lechon Kawali, and Brazo de Mercedes.

The dynamic and innovative resort complex, located on an approximately 6.2-hectare site at the gateway to Entertainment City, includes the ultimate in entertainment, hotel, retail and dining and lifestyle experiences with aggregated gaming space, including VIP and mass-market gaming facilities with up to approximately 380 gaming tables, 1,700 slot machines and 1,700 electronic table games.

City of Dreams Manila delivers an unparalleled entertainment and hospitality experience to the Philippines and is playing a key role in strengthening the depth and diversity of Manila’s leisure, business and tourism offering, enhancing its growing position as one of Asia’s premier leisure destinations. It has been developed to specifically meet the needs of the large, rapidly growing and increasingly diverse audience of leisure and entertainment seekers both in the Philippines and those visiting Manila from across the Asia region and around the world.