No, this is not about the taxi movie or even about New York taxis. It’s a look at Cebu taxi drivers, traffic and the safety of the occupants riding inside.

First, to a new visitor from the USA or Europe it might be an interesting or a frightening experience to say the least. But for the most part I think it is safe, riding in the Cebu taxis.

A newcomer will not understand that a two or three lane hi-way has just become five lanes of traffic. That the horn has replaced the brakes and the turn signal lights don’t blink at all before the turn or merging into traffic.

Second, think about trying to get a taxi in New York, Chicago, London or Paris. It might be a long wait or long lines in front of theaters, night clubs or your hotel.

Taxis seem to be everywhere here in Cebu, there are short lines and an abundance of waiting taxis.

The driver is very skilled in getting you from point "A" to point "B" in a short amount of time. But if not wise, you could experience a few more points in the alphabet during your ride! When you get into a Cebu taxi make sure there is a meter or you know the fare to your destination and agree before proceeding.

The drivers are a cross between a taxi driver and a race car driver at a motor speedway. ( Indy 500 ) They can make turns, follow close, and stop on a dime at excessive speeds. Try going through streets the size of a city alley and missing people sitting, standing and walking within this same space.

The alley size street has other vehicles passing from the opposite direction and of course the extended market and crowds in the evening. 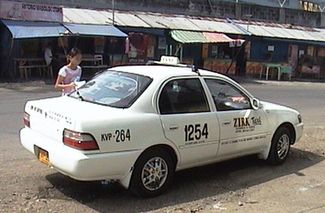 Now, the show-stopper; passing vehicles in this marginal area of the race track. You can read the license, see the scratches in the paint, count the seconds before impact and reach for the door. But before you complete your move his is done and you are around the other vehicle.

Maybe after one or two close calls you will settle down and begin to trust his ability. But don’t think that there won't be something that you will question later or happen upon a new situation. It's just around the next corner waiting for you!

You may have only experienced driving in the daytime sunshine and the trip from the airport to your hotel.

Now try rush hour traffic, stop lights, brake lights, headlights, vehicles with no lights and people walking in-between vehicles. Your Cebu taxi driver has yet to slow down or stop moving at great speed and swift moves. This is city driving at its best in Cebu.

There are a couple of weather conditions you will not encounter here in the Philippines such as snow or ice but one condition that is common is the rain. But here it can rain a little or a lot in a small period of time. Yet, traffic doesn’t slow nor does the the driver's skills.

But if you travel outside the city on country roads and oh!, mountainous regions, it will provide you with another great experience, if you have nerves of steel. Yes, I didn’t mention wipers that don’t function, fog and fogged windows.

I don’t think I would travel much at night on these roadways or when raining. It seems that the safety issue is at its greatest concern at these times and were most fatalities occur.

Have a good time in Cebu, try to relax, enjoy your trip and share the great experiences with your taxi driver. (The Fatman)