The Philippines, no doubt, is full of vibrant hues and even more colorful people. Azure skies and aquamarine waters are complemented by the bright, sunshiny personality of Filipinos.

Designed by one of the most celebrated Filipino couturiers, the new look is bright and cheery, yet polished and streamlined.

"In our 20th year, we complete the airline's rebranding by partnering with a homegrown Cebu talent.

Fashion designer Jun Escario understands the practical needs of our crew while inflight, yet shares our passion to showcase the Philippines' colors to the world," said CEB VP for Marketing and Distribution Candice Iyog.

Escario has gained local and international recognition for his romantic wedding gowns and exquisite evening wear.

He has been in the fashion industry for more than two decades and continues to reinvent himself, marking more milestones along the way. This will be the first time his designs are worn by cabin crew.

"I approached the task of designing Cebu Pacific's new cabin crew uniforms with form and function in mind. I really look forward to it being rolled out across the network," said Escario.

He said the stylish new look offers a subtle nod to the alluring tropical isles of the Philippines, the colors giving prominence to the country's land, sea, sky and sun.

A key piece in the ensemble is the top and cardigan in a sunny shade of yellow. To complement the wearer's shape, the tops come with vertical darts for a slender fit. 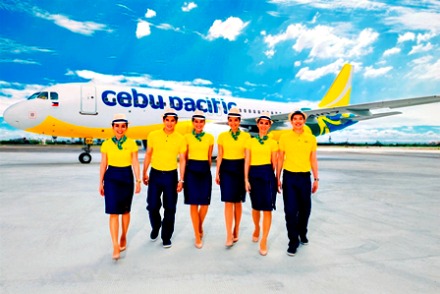 The ladies' look also includes a knee-length skirt in crisp, navy denim that comes in a slim silhouette—flattering and easy to move around in, a perfect execution of casual elegance.

"Denim is a year-round fashion staple, and it can be casual yet classy," said Escario. The skirt also features fun ruffle details on the front as well as a zipped detail that runs across one thigh.

Tying the overall look together is a scarf in a tropical print, featuring Cebu Pacific's official colors.

The scarf also has one standard knot style, minimizing the need for the cabin crew to fuss with tying it on their neck.

"All they have to do is put one end through the loop on the other end, and they're done," added Escario. "Simple and easy, yet stylish."

When the weather is chilly, the cabin crew can bundle up with a sleek denim trench coat.

The ladies are set to glow with understated makeup, with their hair in a neat braided bun. Simple pearl earrings complete their chic look.

For the men, a crisp polo shirt in the same shade of yellow goes together with denim jeans lined with yellow stitching.