Cebu Ecotourism Site Hopes to Replicate Success in Other Villages

What used to be a humble fishing village has now become an award-winning ecotourism site, which is set to be replicated in eight other villages by next year.

Located 60-kilometers mid-west of the fifth-class municipality of Aloguinsan in Cebu is Barangay Bojo, a village composed of a community of more or less 250 people, mostly families, who have made a living through ecotourism initiatives acquired from caring for the Bojo River --one of the best eco-tourism destinations in Cebu.

Bojo Aloguinsan Ecotourism Association (BAETAS), which is a local people's organization in Aloguinsan, runs a guided tour of the river, dubbed as Bojo River Cruise, with the support of the local authorities and the Tourism Department.

BAETAS community organizer Joselito Costas said that while Cebu might generally give off the impression of being a destination for mass tourism, Bojo River Cruise was different.

“We branded ourselves as an ecotourism destination on Cebu. We were the first town in Cebu that developed an ecotourism product,” Costas told reporters in an interview, noting that the destination first catered to tourists in 2009. 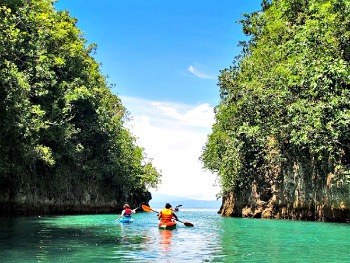 As of its latest data in June, Costas said that the Bojo River Cruise destination has catered to 30,000 visitors, mostly domestic tourists. Costas described this number as “significant.”

“We limit our guests to 50 a day because we don’t compromise the carrying capacity of the river. Beyond that you have to reschedule. There are no compromises,” Costas said.

“For us, 50 is already very profitable. We don’t want to compromise the environmental integrity of the area,” he added, noting that BAETAS has been “very careful” in its promotion.

Costas said that the municipality of Aloguisan has invested Php1-million to start developing the village into ecotourism site.

He meanwhile expressed hope that seven more municipalities and one city, which are set to build a similar destination as the Bojo River Cruise, will be able to replicate its success.

These are Tabuelan, Asturias, Balamban, Tuburan, Pinamungahan, Alegria Toledo city, and another one in Aloguisan. A budget proposal of Php14-million (Php3-million for each municipality/city) is in the pipeline.

“When you say ecotourism quantity doesn’t matter it’s the quality of the experience. It gives the fishing village an alternative source of income and helps put off pressure from the sea,” Costas said.

“We’re not really pushing for a big market, we just want to have the carrying capacity reach,” he added.

Costas said that it was enough that Cebu succeeded in showing that “it can be more than just beaches, history and street-dancing.”

“With this award, Cebu has shown their aside side which is ecotourism,” Costas said. “When you say ecotourism quantity doesn’t matter. It’s the quality of the experience.” (PNA)RMA/Azer N. Parrocha