Hugging ‘Big Bell’ and Feeling the Fun in Capiz

When the Spaniards came to the Philippines centuries ago, they established their second settlement in Panay town in Capiz next to Cebu

The Augustinian priests who accompanied the Spanish expedition forces put up in Panay a church that would eventually be renowned for having the largest church bell in Asia and third biggest in the world.

Owing to its sheer size and weight, seven feet in diameter, five feet in height and 10.4 metric tons in weight, the bell inspires awe and amazement, whether it is tolling or simply hanging from the rafter of the tall belfry. Hence, it was called “Big Bell.”

And when it rings, “Big Bell” can be heard several kilometers away even in the bustling provincial capital Roxas City which is about eight kilometers away.

The bell, which is called in the native tongue as “Dako nga Lingganay,” was cast in 1878 from 10 sacks of gold and silver coins donated by the townsfolk. Spanish priest Fr. Jose Beloso is credited for having been responsible for the making of the bell.

“Big Bell” bears an apt Spanish inscription which translates “I am God’s voice which shall echo praise from one end of the town of Pan-ay to the other, so that Christ’s faithful followers may enter this house of God to receive heavenly graces.”

The gigantic Panay bell and church, first built in 1868, and the museum inside the convent are part of the sites, destinations and attractions that are offered by the provincial government of Capiz and city government of Roxas to local and foreign tourists and other visitors. 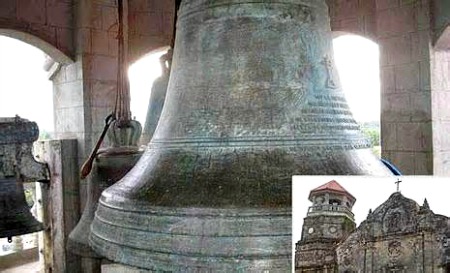 The whole town itself is replete with stories that have spun out from its historic beginnings. Most notably, Panay has figured prominently in Spanish expedition chronicles because their leader, Miguel Lopez de Legaspi moved his troops from Cebu to Capiz particularly in Panay town in 1569 upon knowing that the town had plenty of food for his troops. Legaspi also admired the townsfolk for being friendly.

People who climb the 63 steps of the belfry stairs to reach, see and touch “Big Bell” say that the experience long resonates in their memories in this era of car horns, headphone music, and ringtones.

“If there’s a 64-dollar answer to a 64-dollar question of ‘Have you met Big Bell?’, then that was it - climbing 63 steps, one rung short of 64, and embracing and saying Hi, Big Bell,” enthused a member of the visiting group.

Nearby is Roxas City where where there is a one-hour tour of a greenbelt ecopark along the Palina River between Barangays Cagay and Talon aboard a bamboo raft pulled by a motorized banca.

The marine eco-park was established in 2011 as part of the city government’s overall environmental resource management program. A similar project is found at Barangay Culajao of the city. There’s also another river tour on record along Cadimahan River.

These destinations are located near the heart of Roxas City, where the Spaniards moved the main settlement or capital of the province to this place centuries ago, from Panay town because of its strategic location.

His monument occupies a prominent area in the city plaza near the “Ang Panublion Museum” at the city plaza which keeps accounts of the colorful history of the city as well as the province. The museum’s building was originally a gigantic water tank for the benefit of residents during the dry months.

Capiz’s tourism treasures have further reached far and wide, thanks to the support of the mass media, new media, social networking sites, bloggers, and other netizens who have served as channels of information about these various destinations and attractions.

And just as what you will realize at the end of your cultural tour, Capiz indeed has also got more of the fun that the Philippines has in store for tourists. (Jaime S. Cabag, Jr.-PIA6)