Camarines Norte is Full of Surprises

Come to Bicol and be mesmerized by the region’s boundless wonders starting from its northern gateway, Camarines Norte, the province that is full of surprises.

The topography of the province is generally mountainous and its verdant forests conceal natural wonders like exciting waterfalls, an intimidating cave, an amazingly clean river and a rare soda spring, among other marvelous places that the rest of the region do not have.

The other side of the province is a coastal territory bounded by Basiad Bay on the west, the Pacific Ocean on the north and the San Miguel Bay on the east.

These waters bare virgin islands, beautiful beaches and a certain species of capiz shell that is believed to be the largest in the world.

All these are known only to a few foreign and local tourists.

At its doorway from the Southern Tagalog region sits the town of Sta. Elena that is gifted with the exciting Sta. Elena Twin Falls located deep in the jungles and could be reached only by hiking through woods and mountains.

Down to the coastal town of Mercedes, a still unnamed underground cave which is an exhilarating wonder begging to be explored by brave adventurers sits deep down the surface of called Canton Island whose coves is also waiting to be explored either by swimming or rappelling.

Canton is part of the Mercedes’ Seven Group of Islands that express a pleasant surprise how beauties like these have been kept from the national tourism spotlight for so long.

Part of the group is the Canimog Island that boasts of coral gardens, huge and healthy coral growth and marine fauna.

It is where the dramatic lighthouse considered the oldest in the entire Bicol Region stands.

By the lighthouse are sweeping views of the Pacific Ocean, the beautiful cliffs and rock formations, as well as an eye on the thousands of huge bats literally hanging out in the island’s lush foliage.

Next to the island of Canimog are the stunning islands of Apuao Pequeña and Apuao Grande that are connected by a white sand bar where a walk across could be done during low tide.

The twin islands’ long stretches of white sand beaches lined with pine-like agoho trees is similar but a million times better with its cleaner environment and significantly less people than the overrated Anawangin Cove in Zambales. 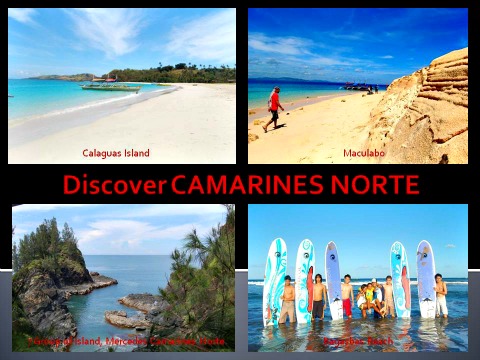 The rest of the islands – Malasugui, Caringo and Quinapaguian all have white sand beaches, beautiful sand bars and almost no tourists even as the area is good for island hopping, swimming, bird watching, boating, snorkeling, trekking, scuba diving, jet skiing, spear fishing and other relative activities.

Another must-see island is Quinamanucan which has spectacular wall dives with drop offs shooting up from 1,000 meters down as well as having impressive underwater gardens that count stony, whip, soft corals and black corals.

It is around 35 minutes by boat from Vinzons town.

Back on the mainland, the province has more heaps of unexplored mountains and waterfalls like the Mananap Falls in San Vicente town that requires a hike of two kilometers uphill and the 70 feet tall Colasi Falls in Barangay Colasi, Mercedes that is a three-hour walk from the town proper.

The soda spring in Barangay Lanot is also found in Mercedes.

Other notable waterfalls in Camarines Norte are Pag-asa Falls, Binuan Falls, Maligaya Falls, Malatap Falls that are almost equidistant from the towns of Labo, Jose Panganiban and Capalonga.

Another interesting eco-destination is the Sinagtala Resort sa Kanayunan in Barangay Tulay na Lupa, Labo. It is located within a 13.5-hectare forested area along the banks of the Matogdon River.

The main attraction here is a series of pools with cool waters diverted from the river and separated by rock barriers.

There are other places to discover in the province, like Lanot Beach, Talisay Beach, the Abasig-Matogdon-Mananap Watershed and Pulang Daga (Red Soil) in the gold-rich town of Paracale, so called because the sandy beach is colored red.

Of course, the most popular attraction in the province is the Bagasbas Beach in this capital town which is a kite-boarding venue and site of the yearly International Kiteboarding Competition started in 2009.

The beach has a long and wide expense of fine gray sand and during clear but windy days, its waves that roll-in from the Pacific Ocean make it a paradise for surfing beginners and afficionados.

It is considered as one of the most beautiful beaches in the country. Locals claim that Bagasbas is the real cradle of Philippine surfing.

More windy, private and scenic than Bagasbas is Mangcamagong Beach with its beige sand in Basud town where just strewn along the shores are what the Bureau of Fisheries and Aquatic Resources (BFAR) considers the biggest capiz shells (Placuna placenta), also known as windowpane oyster.

Local authorities are preparing the data on this marine species to be submitted to the Guinness Book to challenge the record set by Sri Lanka for the biggest capiz shell in the world.

Basud also boast of its Basud River that is known as one of the cleanest rivers in the country.

Such is Camarines Norte, which is full of surprises but according to its governor Edgardo Tallado, the province is mostly off the traveler’s list mainly because of a dearth in local tourism promotion.

"This means that it is not overrun by hordes of tourists and you would have a good feel of the local culture and its many beautiful places not usually advertised widely.

What it lacks in tourist numbers it makes up for with the numerous beautiful places that a person with the spirit of adventure would truly appreciate,” the governor said.

Nonetheless, he said, since the beginning of the Spanish inroads in the province up to the present, there are quite a number of cultural and social practices in Camarines Norte which have endured the ravages of colonization.

The penchant for music, aesthetics, culinary arts and folkloric tales is still very much apparent and while people nowadays in urban centers are conspicuously affected by modernity, the culture of long ago is still felt in the province.

As of the latest count there are more Tagalog speaking people in Camarines Norte than who use Bicol as their lingua franca.

This linguistic situation makes for a weaker cultural cohesion with Bicolandia but on the other hand, it provides a wider corridor for the province because of its openness to a larger cultural base, Tallado stressed. (PNA)DCT/LOR/LQ/Danny O. Calleja/cbd