The greeting – typically Ilocano, a major language in the northeastern part of Luzon, including the province of Cagayan – welcomes visitors to one of the province’s best tourist attractions, the seven-chambered Callao Cave, 21 kms northeast of this capital city.

Loosely translated, the Ilocano greeting means “welcome, sirs/madams, to the home of the oldest Filipino” – in reference to the cave where the remains of an ancient Filipino were discovered.

Local officials, led by Gov. Alvaro Antonio, are inviting visitors – first timers and returnees – to take time and explore the mysteries of their “preserved system of caves and historic churches.”

Or go, Antonio’s line, “to the downstream to savor the bounties of the mighty Cagayan River and traverse the pristine coastline towards the bordering oceans with our whales and dolphins…”

Cagayan, which occupies the northeastern tip of the Philippines, takes pride in what officials call the “warm, friendly and hospitable blend” of native Ybanags (sometimes spelled out Ibanag), Ytawes, Malauegs, Negritoes, and the migrant Ilocanos, Tagalogs, Pangasinenses, Muslims and Visayans.

English and Filipino are widely spoken in the province, but Ilocano is a predominant language, as are the dialects Ybanag, Ytawes and Malaueg.

Officials say it was at the Callao Cave, in Peñablanca town, where the fossilized remains of the Callao man had been discovered. 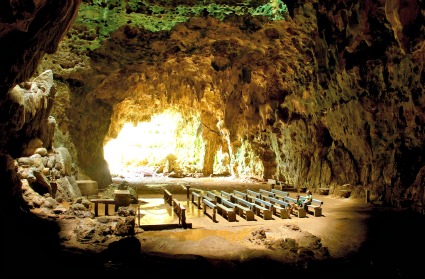 They say the anthropological find consisted of a single 61-millimeter metatarsal which, when dated using uranium series ablation, was found to be at least about 67,000 years old.

The Tabon man refers to the fossilized anatomically modern human remains discovered in the Tabon Caves in Lipuun Point in Quezon, Palawan on May 28, 1962 by Dr. Robert B. Fox, an American anthropologist of the National Museum of the Philippines.

Anthropology researchers have noted that the Callao man was probably under four feet tall. Researchers also believe that Aetas, mountain dwellers today in Luzon, could be descendants of Callao Man.

Callao Cave has a natural cathedral at the first chamber, which was turned into a chapel by residents of the area.

The conditions inside the cave cause stalactites and stalagmites, particularly in the deeper chambers, each chamber having natural crevices, which let light get into the cave, serving as illumination for the otherwise dark areas.

According to officials, more than 300 caves dot the area, 75 of which have been documented by the National Museum since 1977.

Within the area is the Pinacanauan River conducive for river rafting or boating, kayaking, fishing and swimming while the mountains are perfect for trekking and mountaineering.

Cagayan also takes pride in having, apart from the natural attractions, historical as well as cultural and religious landmarks.

Cagayan has its Portabaga Falls in Santa Praxedes near the border with Ilocos Norte on the northwest, the falls, about 15 meters in height, have three drop-off points and a big man-made catch basin.

There is also the Iguig Calvary Hills and the Parish of St. James the Greater, nestled on an 11-hectare rolling hills, with the larger than life-size concrete 14 Stations of the Cross depicting Christ’s suffering before his death at Mount Calvary.

St. James the Greater Church, built of concentric bricks, has buttresses, one of the very few existing in the country, according to Catholic Church sources.

There are also 17 Spanish-era churches in the province which have architectural details, including Alcala town’s St. Philomene Church, a wide brick structure, and Rizal’s San Raymundo de Penaforte Church, the only cultural heritage site declared by the National Commission for Culture and the Arts.

At least two bridges, both man-made, have awed tourists: the Magapit Suspension Bridge which spans the Cagayan River in this old capital town, and the 2.5-km Buntun Bridge, the second longest bridge in the Philippines after the San Juanico Bridge which links Samar and Leyte in Eastern Visayas.

Many tourists – Filipinos and non-Filipinos – have an unobstructed view from the bridge of the mighty Cagayan River, erstwhile infested with deadly crocodiles.

Tourism officials, repeating the Ilocano words of welcome, hope more tourists will visit the province in 2013 – by air from Manila, only about 50 minutes, or by road through the Maharlika Highway that meanders through the Valley or through the MacArthur Highway from Ilocos Norte. (PNA/GHG/Honor Blanco Cabie)