Try a new destination and bet your bottom dollar this summer on Calayan, a rosary of islands up north in Cagayan Province

Slowly, it is emerging as one of the fastest new- found land of wonders, mysteries, adventures, fascination and surprises that you think you’re about to open a Chinese box. This was how the Women in Travel, a group of women travel journalists, saw the island when they rated it as the 2nd Most Undiscovered and Unexplored Destination.

Whatever your interest is, the islands offer a variety of things from archaeology, history, ancient customs and tradition to interesting sights, exciting flora and fauna, virgin forests and sparkling powder white sand beaches.

Here, you are never wanting of what to do and for sure, you will bargain for another day of stay if only to savor more of what the islands offer. Virginal best describe the island municipality between mainland Luzon and Batanes and is composed of the beautiful individual islands of Calayan Proper, Camiguin, Babuyan Claro and Dalupiri.

Calayan is a confirmed haven for photographers, scuba divers, archaeologists, historians, beachcombers and the lazy tourists. Its majestic if not reportedly undisturbed forest, provide a backdrop amid volcanic and coral sand beaches in all of the islands, inhabited by thousands of hermit crabs of various colors, hues and sizes.

“We’re moving heaven and earth to push our island into the mainstream of tourism. There’s no reason why we should fail,” Tess Singun, Homestay operator said.

To prepare the island, an airstrip is on the drawing board for light planes in time for the expected arrival of droves of visitors and tourists this year.

In 1998, Calayan hogged the world’s attention when a group of young conservationists led by one Carmela Espanola discovered the latest bird species, all the while kept secret by its deep and unexplored forests. The Calayan Rail (Garillalus calayanensis), a dark-brown with orange-red bill and legs locally known as Piding, has placed the island into the world map of discoveries as another bastion of rare flora and fauna.

This gem of an island paradise plays host to a lot of species including the threatened coconut crab, locally known as tatus, a nut-cracking crab species endemic in the area, sea green turtles, wild boars, musang(wild civet cat), the timid native crocodile (Crocodillus philippinensis) and the ukong, an interesting bird species which egg is bigger than its body and lays it in a mound.

Rediscover Calayan’s native orchids. In fact, the island is home to a prize-winning orchid, the Calayan Emcee, awarded during the 1984 National Orchid Exhibition in Manila. 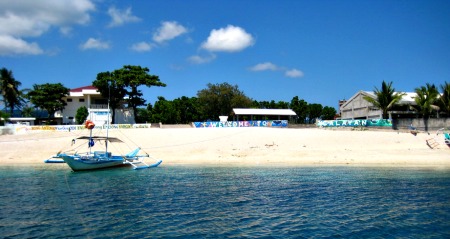 If you have an adventurous palate, try the exotic food offerings of the Calayanos. Pick leisurely the Sidai fruits straight from its trees and discover that it is similar in shape and taste to the lanzones or lychee. Why not indulge in Risek while in the islands? Risek is a concoction similar to bagoong (fermented fish in salt) yet can double as a finger food.

Still on food within the islands, there’s a little secret of the Calayanos I want to share with you: they don’t usually eat tahong. This is because the islanders are blessed with a better alternative to tahong: the bingit-bingit, an edible colored shellfish.

The island is so rich with water resources like sea cucumber, seaweeds, crabs and the giant clam shells which when cooked is turned into lime for betel nut chewing. In fact, Calayan now boasts of fossilized giant clams embedded on its mountains. It’s another challenge to discover them yourself and make an archaeological difference.

Speaking of archeology, Calayan is a goldmine and any archaeologist’s ultimate dream of a dig. In its verdant hills, proud mountains, serene beaches and sea bottom are evidences of ancient trade relations between the islanders and most of the Asian countries.

This is aside from the fact that the water of the Babuyanes is an international maritime route. Was there a possibility that even the world’s greatest seafarers of all time, the Vikings, at one time or another, visited the islands? Why, in its sea bottom are hundreds of sunken ships for discovery and exploration.

Lory Decena-Malbog of the Cagayan Provincial Museum office said it is remarkable that Calayanos have long ago practiced death rituals unequalled in Northern Luzon which can be at par with those hanging coffins of Sagada, Mountain Province.

You see, within the Sibang Cove in Barangay Dadao, Calayan, giant burial jars have been unearthed by commissioned local and foreign archaeologists in the early 1970’s. The burial grounds, atop a hill and overlooking the unexplored yet fabulous Sibang Cove beach revealed alleged similarities of the islander’s way of burying their dead and that of the seafarers.

Try to visit the area and if by chance, you explore other nearby areas and discover a group of stones in circular or oblong positions, chances are, you just stepped into one of them. Accordingly, the number of original stones in a sacred burial ground is the same number of people who attended the burial itself.

Discover for yourself the significance of such stone formations and be proud as Filipino or Cagayano in particular, that close family ties have been a practice in the island for thousands of years now.

Aside from these excavations, the diggers confirmed such trade relations most especially between the Philippines and China. This was evidenced by ceramics and other artifacts which date back to the Sung and Ming dynasties.

Calayan is a pristine destination. It is bereft of the luxuries of developed major tourism players. It can only offer nature at its best. This is actually the secrets of Calayan- raw, unspoiled, virginal and promising. (ALM/Benjie S. De Yro/PIA-2)