Our Lady of Piat: Part of Cagayan’s Culture and Source of Courage for Cagayanos

The story is retold to practically every generation: a 5-year-old nephew of Dona Ines developed a pestiferous tumor under his arm which threatened his life.

Dona Ines brought him to the Ermita and asked him to pray to the Lady to restore his health while she attended other matters, the boy eventually falling asleep on a stool before the Lady's image. When the boy woke up the boy stood up and was already completely cured.

The Itawes region, an agricultural area west of the Sierra Madre, experienced severe drought in 1624. Despite the repeated planting of seeds by the farmers, no was forthcoming.

With faith in their hearts, the people marched in procession to the Ermita from their respective towns to ask for rain.But before the procession could get started, it began to rain profusely. The procession was eventually held, but it became instead a procession of thanksgiving to the Lady for the favor received. During that year, generations of Cagayanos say, there was an abundant crop.

These miracles have been attributed to the 16th century Roman Catholic icon of the Blessed Virgin Mary and the central figure at the altar of her shrine in Piat in Cagayan.

Some refer to the image as “Nana Baket” (grand Mother), known in the area as the patroness of the town and one of the most venerated Marian images of Mary in predominantly Christian Philippines.

With the first appearance of the protestant pastors in Penablanca town in 1908, tourism and religious officials in the province say the image of the Virgin and of the Saints were thrown into the river by the new converts upon the instruction of the pastor. But the holy images kept coming back against the current to the place where originally they had been.

A few days after, there was a fire in tow, and the only houses saved from the flames were those where the images of the Lady and the Saints were preserved.

These are just but a few of the many graces, miracles or extraordinary favors granted to countless devotees of the Lady, who came all the way from Macao, China traversing the ancient seas, centuries ago, according to the regional Dept. of Tourism. Historical records reveal that during the early part of the 16th century, the Dominican Missionaries, driven by their zeal to spread the gospel of the Lord, ventured to the east to bring light of faith to the people. 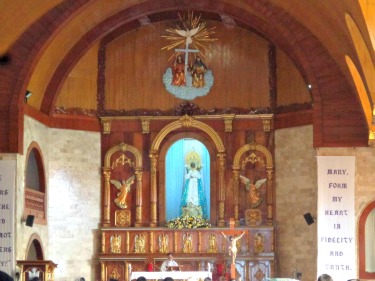 Cagayan Philippines - Our Lady of Piat via ilovetuguegarao.com

From Macao in 1604. these ministers of God brought the icon of the Lady to the Philippines where the natives were found to be wild. Tourism officials say through the Lady's divine intercession, the friars found no difficulty in converting the natives to Christianity, brought to the islands in 1521 when Portiguese navigator Ferdinand Magellan sailed to the uncharted east under the flag of Spain.

The Dominican Fathers later brought the icon to Lal-lo north of here, the ancient capital of Cagayan and at the time the seat of the Diocese of Nueva Segovia.

From here, Christianization started in Cagayan. In 1620, the missionaries found out that some areas of the province were not that easy to bring to the Christian fold – reason they brought the image to the Itawes populated towns. They eventually brought the icon to the hilly town of Piat and was warmly welcomed by the warring tribes.

Towns, the hilly town of Piat where the lady chose to dwell.

Tourism officials say that, henceforth, the bellicose natives laid down their arms and directed their efforts towards the cause of peace and prosperity.

Her fame spread like wildfire – with thousands of pilgrims from nearby provinces and other areas of the Philippines, including some from abroad, visiting Piat to pay respects to “Nana Baket.”

Today, the once sleepy town of Piat has become a bustling municipality equipped with fast food chains and tourist inns to accommodate the ever increasing influx of pilgrims especially during the Lady's feast day on July 2, every year.

The town of Piat is about 30-minute drive from Tuguegarao City, the capital of Cagayan Province.

Cagayanos have remained attached to the Lady, saying they themselves could have never imagined how they were able to survive the many crises and yet surfaced victorious all through the years.

Cagayan Gov. Alvaro T. Antonio has declared the image of the Blessed Mother in Piat – also known here as “Reyna Ti Tanap (Queen of the Valley) -- has been the Cagayanos' source of courage in times of doubt.

According to Antonio, the devotion to the Our Lady of Piat has been a significant part of Cagayanos' culture, adding the Lady's presence is a subtle manifestation of his provincemates' piety, humility and faithfulness.

"Our Lady of Piat is a bastion of hope -- her presence illuminates Cagayanos' passion for kindness and quenches their indifference", Antonio adds. (PNA/HBC/Simeon Dilan)