Historic and picturesque Buguey in Cagayan province has always been consistent and insistent as far as their culinary offerings are concerned. While it is acknowledged as a crab (mud crab) center in the Philippines, it offers other juicier and mouth-watering foods in just one location.

Before the Ibanag (indigenous peoples of the province) term “Navugay ira,” meaning, they were capsized, from where the present name of the town, Buguey, was allegedly taken, the town was originally called Cagayan. In my unscheduled visits and official coverages in the said coastal town, I always had a heyday savoring the ‘blurping’ offerings of friends Ric and Natalie Villalon of Barangay Leron.

Why, even the political clan of the Antipordas cooks very well and can put to shame self-proclaimed chefs in this part of the world.

For starters, do you know that in Buguey, salads literally jump? And how!

A traditional food preparation of the Bugueyano, the salad is actually live shrimps sprinkled with calamansi or lemon juice plus a little salt to taste. To the uninitiated, it may turn him off if he imagines that he is about to put into his mouth literally jumps out from its Chinese bowl and inside his mouth.

But Ric and Natalie Villalon, ever-gracious Bugueyano hosts that they are, always caution the neophyte to take it easy. You have to hold the head of the jumping species by the head first, deep it into the bowl of calamansi and salt, bit the tail first, hold the body and again deep it.

Finally, bit the head and place it in your mouth. The tendency is, the shrimp even without the tail and the head still wiggle but that’s the thrill of it all. Now, chew its sweetness and down it with pandan-flavored well-cooked rice.

So you see, in Buguey, the jumping salad is a salad that is serve live and not hot. It can only be fresh.

However, many have complained of instant dysentery while indulging on the jumping salad. The secret here, according to Mayor Lloyd Antiporda, is to take only small amount of water so as not to trigger the stomach. 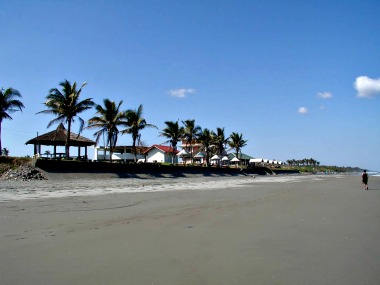 With the bountiful harvest of shrimps generously provided by the now over-silted Buguey Lagoon, another tourism branding can be given to the town for whatever tourism purpose it may serve them – land of jumping salad eaters.

On the other hand, another culinary ace of Buguey is its oysters, locally known as ‘tirem.’ Early mornings at Buguey, even before the Pacific sun breaks the stillness of the dawn of fumes and bubbles, ambulant vendors shout for “tireeeeeeem,” alongside “botcheeeeee” and “pandesaaaaal” as if a tsunami warning had been raised.

Mayor Lloyd said the salinity of the Buguey River allows two species of oysters to grow abundantly in the area- the talabang kabayo and the talabang tsinelas. The river has always been a natural habitat of the species and BFAR has confirmed that oysters gathered in the area are of high quality.

While there are oyster farms in Buguey, you can also gather them in the wilds as oysters have been endemic in the municipality. In the oyster farms, the farmer simply hangs used oyster shells, stringed and connect them to a bamboo pole half submerged in the sea.

Spats (oyster ‘seedlings’) would cling to the empty shells and after three months, the shells are ready for harvest.

Like the shrimps, the oysters in Buguey are likewise prepared into salads called ‘kilawen (uncooked or served fresh)’ with the same ingredients- calamansi or fish sauce in lieu of salt. This is blanched before it is served. The calamansi can go separately or mixed with the oysters.

Jumping salad and tirem kilawen have always been part of the Bugueyanos breakfast for as long as they remember. However, for those who don’t buy the idea of eating a blanched seashell, there is a popular dish especially cooked for breakfast. It’s tirem fried with scrambled eggs. My first taste of such nutritious delight was only three years ago personally cooked and served by then Mayor Cerry, brother of Lloyd.

For the former local official, cooking is one way of staying away from pot boiling politics and aroma of intrigues. Taken in the morning, it is a refreshing treat as against the usual servings of hot dogs, lasagna, bologna and meat loaves, saturated with spices, salt and oil.

So if you find yourself indulging in jumping salad, tirem with scrambled eggs, veggies or freshly cooked fish, think again. You must be in Buguey, the undisputed crab capital of the Philippines. (ALM/Benjie S. De Yro/PIA-2)