For over a year of being in a slump following a disastrous earthquake that drastically altered the Loboc skyline, the tourism town re-launched its charming river cruises now but with a new twist.

The twist: a standardized tourism menu, a strict rotating departure system and more infrastructure to upgrade the river cruise experience, according to Loboc Mayor Helen Alaba in an interview.

Loboc River cruises “ran aground” when repairs had to be made to the Loboc Bailey Bridge, cutting the main access to the Loboc Tourism Complex where the floating restos depart, which can only be accessed by crossing the bridge.

As the town devised a system to use the unfinished jumbo bridge locate alongside the bailey bridge, tourism arrivals slumped a bit due to the tourists inconvenience of walking up the steep ladders and using up precious enjoyment time.

But as if the closed bridge was not enough, the October 15, 2013 earthquake jeopardized the boat docking facility and portions of the bridge leading to the Tourism Complex, which simply choked the town’s main tourism activity to death, narrates a boat operator who used to have three boat trips reduced to one or none in a day.

The earthquake also toppled centuries-old Sts. Peter and Paul Church, reduced the iconic leaning stone tower to an ugly pile of heap and rendered useless the bridge elevators which could have offered aged tourists going to the complex, with some respite.

After the earthquake, the town had to hasten the repairs of the docking facility and clear public infrastructure debris, momentarily stopping the river cruise operations. 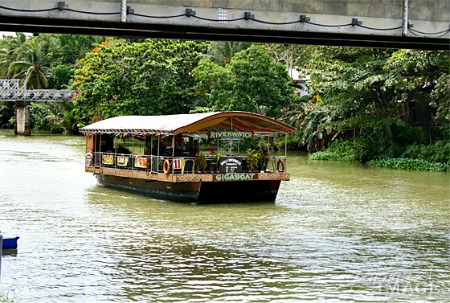 But access to the tourism complex was so prohibitive that from a peak of 2-3 thousand tourists a day stuttered to a miserable 180, Mayor Alaba said.

A tourism activity that has pegged for Bohol a signature icon of the jade green river and the ubiquitous tourists-laden floating fiesta, Loboc River Cruises, rendered to the town a daily revenue of at least P100 for every tourist coming in.

The sum is a river toll fee that the town uses to rehabilitate the river and remedy environmental impacts that the tourism activity may cause, local leaders added.

The operation of the floating restaurants provide employment to river boat operators, signalmen, waiters, cooks, and support industries like market suppliers, earning the needed stir in the local economy.

But, like all competitive businesses, the river cruise also hosts some issues.

Operators compete against each other, offering the most incentives so drivers are more prone to patronize those who can give the best offers.

At least another operator banks on an international rating company and a vast array of food that most visiting tourist picks it over others. This, in a way, creates imbalance that locals wish to pat into shape, a tour driver confesses.

Now with an established common menu which the town put up after a series of capacitating trainings and workshops using respected chefs and industry giants, Loboc river cruises steam ahead with a more even playing field, hints Elmer Varquez, town tourism officer.

And with a stricter departure system agreed upon by the most operators, we seem to see that things should work out fine, he added.

However, even tourism operators believe that to make the river cruise experience a uniquely Boholano and yet business-like for tourists out to maximize time and enjoyment, a system has to be honed constantly.

“This is going to be a work in progress,” Sultan, who owns The Village Floating Restaurant, shared. (rmn/rac/PIA Bohol)