Canaan Hill Farm and Honey Garden in Caibiran, Biliran has been attracting tourists since it reopened its door to visitors

The farm in Uson village temporarily shut down its operation in February this year due to the effects of the extended dry season. The management re-opened the farm to the public three months ago.

Since their re-opening, hundreds of tourists have explored Canaan Hills, including farmers from other provinces who wanted to learn organic farming.

Canaan Hill Farm and Honey Garden is the first organic farm in Eastern Visayas that earned accreditation from the Department of Tourism regional office under its fun tourism program.

The owner derived its farm’s name from the Bible.

The farm is situated in a seven hectare land owned by the Espinazo family of Caibiran town, about two hours drive from Tacloban City and 30 minutes travel from Naval town, the capital of Biliran province.

The farm is personally managed by Espinazo couple and their nine children, who all left their jobs to concentrate on farming and develop their land as a tourist destination.

“Based on what we are seeing and noticed, only few people now engage into farming. We made this as our advocacy to encourage more people to have passion in farming,” said Zandro Espinazo, the eldest child.

Aside from his parents and siblings, their children also help the farm’s operation. 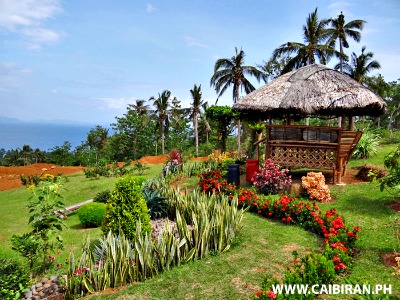 Jeffrey Espinazo, a former seaman and professor of Naval State University, acts as tour guide at the farm. He said that farming life is precious.

“We do not allow killing inside the farm even a single insect or a snake,” said Jeffrey.

The price of products inside the farm are much higher compared to products sold in the marker but tourists are prepared to buy vegetables and fruits from them because they are aware that it’s completely organic.

Jeffrey added that visitors to the farm are not allowed to bring junk food or soft drinks, smoke or even drink liquor. They also strictly prohibit bringing of inorganic food.

Upon arrival, tourists are briefed on dos and don’ts inside the farm by the farm manager. After the briefing, they will have a quick tour of the nursery, and herb and bee garden that is located at the foot of the hill.

From the foot of the hill, visitors will have to hike uphill to check the area of the farm where vegetables and fruit trees are planted.

More than 30 varieties of fruits and vegetables now exist inside the farm. The owner has applied contour farming, the practice of tilling sloped land along lines of consistent elevation in order to conserve rainwater and to reduce soil losses from surface erosion.

Aside from picking vegetables and fruit, visitors may also plant fruit trees during their visit and they are also taught the process of marcotting, a form of vegetative reproduction that consists of inducing rooting part of a tree branch.

The mother, Priscilla Alavera-Espinazo, prepares the food served to the guests. The farm is open to the public from Monday to Saturday.

During Sundays, the farm is closed to the public as owners devote this day to a day of rest.

Tourist who want to visit the farm will have to pay PHP50 entrance fee, but for educational tours, the charge is only PHP40. (PNA)JMC/SQM/ROEL T. AMAZONA/EGR