The Philippines is a sailing nation – a country of 7641 islands connected for thousands of years by waterways via various watercraft.

To celebrate the Month of the Oceans, Island Buzz Philippines, a water sports company dedicated to make Cebu the "Paddling Capital of the Philippines", paid tribute to traditional Visayan sailing and paddling culture by organizing a Bigiw regatta.

Held on 13 May in Moalboal, the second annual "Bigiw Bugsay" event gathered both traditional sailors and modern stand-up paddle-boarders in the biggest flotilla yet seen in Southern Cebu.

The "Bigiw" is a traditional dugout outrigger sailing canoe which for generations has been used by fishers in the Tañon Strait, a 161-kilometer strip which connects the Visayan and Bohol Seas. Lying between the islands of Cebu and Negros, the Strait is incredibly rich in biodiversity – hosting 62% of the country’s coral species, plus 14 species of whales and dolphins.

Oceana Philippines, Earth’s largest nonprofit dedicated solely to marine conservation, is working with government agencies and other stakeholders to ensure the protection and conservation of this important protected area and fishing ground. 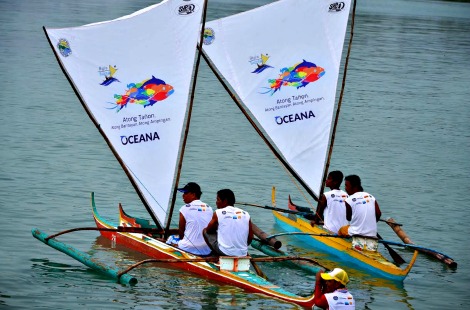 “However, it is threatened by commercial fishers who illegally fish inside the Strait – despite a ban on commercial fishing in both municipal waters and protected areas.

By empowering local fishers and sailors to protect their home waters, we’ll ensure a steady supply of fish for everyone – especially artisanal fishers who fish near the coast.” Owing to new boats and outboard engines, the Strait’s traditional sailing practices are fading. “We aim to keep old sailing practices alive. Instead of using noisy and polluting boats with outboard engines, we’re promoting sailing as a low-impact and low-cost means of transportation,” says Island Buzz Philippines head Buzzy Budlong.

“We hope that future events shall be graced by the fastest paddlers in Cebu and most importantly, local fishermen who will show off their traditional paddling and sailing techniques.”

This year’s race was special because Oceana, Pioneer Epoxy and the local government of Moalboal gave out 50 new sails to the participants.

“Our fishers are true conservation front-liners as they can report illegal and destructive activities to authorities.

By arming them not just with sails but skills and the passion to protect the Tañon Strait, we’ll keep both our fish stocks and fishers away from rough waters,” concludes Ramos.

Oceana works closely with stakeholders which include a wide range of public and private institutions to end illegal commercial fishing in both the Tañon Strait and across the Philippines. (PR/PNA)