Where Are the Best Beaches in Southeast Asia? Have More Fun at Beaches in the Philippines

Often described as the "Land of the Morning," from the Philippines' English version of its national anthem, this Southeast Asian archipelago takes pride in its paradise of beaches.

Given its 7,107 islands from Batanes up north to Tawi Tawi in the far south, approximately the length of China's Great Wall, any tourist, foreign or local, can make a memory in any of its available beaches.

And, with the year around Philippine summer, the tourism department's "it's more fun in the Philippines" slogan is picking up steam.

You can literally have Eden at the country's beaches during summer, when the scorching sun exhales 32 degrees Celsius. 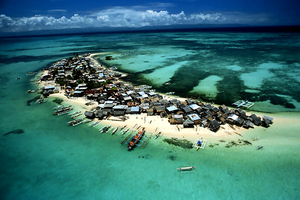 In Pagudpud, 10 hours by bus from Manila, you can also have a glimpse of the power generating windmills in the nearby coastal town of Bangui, which also has its own class of resorts in the shadow of the Ilocos Mountain range.

Farther south is the Pug-os Beach Resort in Cabugao, Ilocos Sur, where you can go surfing in early morning before the tropical sun could breach the crowns of the Ilocos mountain range.

The good thing about these available beaches is the convenient proximity of beach resorts and cottages where tourists may stay for a couple of nights or more.

Up north, in the northwestern zone of the country's main island of Luzon, whipped by winds from the Luzon Bay are the beaches of Pagudpud and Currimao towns in Ilocos Norte where the cable link between Luzon and Hawaii begins.

There are several cottages on the beach side, with amenities of three-star hotels including convention halls.

Only three towns away due north of Cabugao is Pinili, where warriors walked at the turn of the 20th century and during the Japanese occupation of the country in the 1940s.

One of the best places for snorkeling and kayaking from sun up to sun down is Quezon Island in the locally popular Hundred Islands of Pangasinan.

The place is near Lingayen Gulf where US Gen. Douglas MacArthur and his Allied Liberation Troops landed on Jan. 9, 1945 against Japan's Imperial Forces then occupying the Philippines.

While the group has been historically dubbed the Hundred islands, it has in fact 124 at low tide and 123 at high tide.

Superstition suggests that first-timers on a boat ride to the islands will be safe if they kiss the stone statue of Princess Urduja, the legendary princess of Pangasinan at the Hundred islands National Park.

Farther southwest of the Hundred islands is Nagsasa Cove, home to the Aeta -- sometimes spelled Ayta -- aborigines of the Philippines.

The Aetas were relocated there after the bloody eruption of Mount Pinatubo in 1991 after more than 600 years of slumber.

From the cove, where you may share a meal with the hospitable Aeta community, you can have a side trip to the Camnara island, a white sandbar only seven minutes off Pundaquit shores.

The area is not far from what used to be called Subic Naval Base, the erstwhile drydock facility of the giant United States Seventh Fleet.

There are also the Calaguas Islands in Camarines Norte in the palm-dotted Bicol Region northeast of the national capital of Manila.

Tourists who have been there, accessible by bus from Manila to the provincial capital of Daet and then a jeep to Calaguas, say there is a platform of orange clay colored rocks which makes the water cascade on their surfaces.

In the central Philippine province of Cebu, you can have Bantayan island for paradise in Southeast Asia.

At D'Jungle for dinner, you can have a taste, at very affordable prices, of more than 50 dishes in their buffet spread. The buffet includes a sumptuous variety of seafood, meat slices and greens cooked in different mouth-watering styles.

For culture vultures, the town has old structures that have remained standing in the sun and moon despite a major fire in the 1970s.

And the Bantayan Catholic Church has bas reliefs on the exterior and interior described by architects as rather intricate.

It was in Cebu province where Magellan was slain by the first native, Lapu Lapu, to defy foreign domination of the islands in 1521.

Now, if your pick is pink sand, you should proceed to Sta. Cruz island in Zamboanga City in Mindanao.

There are two islands in the Santa Cruz island: the Little and the Great Island Protected Landscapes and Seascapes, with only 40 families, from the minority Samnal tribe, allowed by the government to stay in the protected area.

You can also have a side trip to Camiguin off northeastern Mindanao.

The uninhabited White island is dubbed the "Island Born of Fire" because of its eight volcanoes -- the reason for a wealth of hot and cold springs.

You can have a view of the sunken graveyard as well as the volcanoes Hibok Hibok and Vulcan Daan.

The area can be reached by a flight to Cagayan de oro, then a van to Agora market, a bus ride to Balingoan port, a boat to Mambajao, the provincial capital and then a pump boat to White island.

Truly, as tourist-returnees exclaim, it's more fun in the Philippines! (Honor Blanco Cabie/PNA/rsv/rsm)