Known as the ‘Provincial Tree’ and referred to as the Batanes Pines, Arius (Podocarpuscostalis), is seen as a potential natural resource to spur economic activities in the island province Batanes..

Arius is synonymous with Batanes which grows in abundance in the islands even on rocky environs. In the islands, it is mainly grown for aesthetics with its lush green leaves and versatility as a potential topiary. It is commonly seen along parks, church yards, tourism establishments, schools, roadsides and backyards which add to the mystique of the land and seascapes.

Recently, a proposal was submitted to the Sangguniang Bayan of Itbayat island-town seeking approval to uproot and gather the species in the islands for commercial purposes elsewhere. The proposal somehow touched the cultural sensitivity and sense of history of the Ivatans that they immediately expressed their strongest opposition.

It was a good thing that a public consultation was held in Itbayatisland where 706 indigenous Ivatans cast their votes. It was a landslide “No” among 659 voter-Ivatans against 47 who favored the proposal.

Nathan Alcantara, information officer of the island-town of Itbayat, earlier said several investors from the mainland have expressed their interest to commercialize the species endemic only to the province.

But the natives have spoken: No, to the commercialization of Arius.

Its use as a regular feature in landscaping for ornamental purposes is just one of the several reasons why Ivatans denied the interest of investors. The small leaves of the tree, plus its tough yet beautiful bark make it a preferred species for bonsai production. 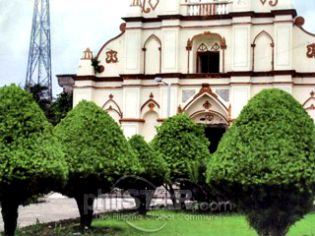 Elsewhere in region 2, the aged trees, definitely from Batanes, are used as Christmas trees during the season. Seedlings of the species are sold at the Batanes Airport for tourists at 10 pesos each.

Several studies have been made on the potentials of the tree including those done by the Bureau of Agricultural Research (BAR) and the Batanes State College (BSC). The researchers confirmed that its fruits are edible and can be processed into several food by-products.

Arius tree bears berry-like fleshy fruits which are brightly colored from red to purple when ripe. The fruits are not popularly eaten in the province except by the birds. The fruits are left to rot and are under-utilized.

The good news is that BAR and BSC undertook a joint study to determine possible by-products out of the unutilized fruits of the organically grown Arius trees. The study resulted in the development of Arius-based products like wine, pastillas, tart, jam, preserved fruits, and tea.

The research team also found that Arius trees bear fruits only in Batanes. Visitors of Batanes who were interviewed told researchers their trees in the lowlands, seedlings of which came from the islands, never bear fruits. Fruiting season would be in the summer months with berries ready for harvest in July to October.

As of this writing, another research by BSC titled “Arius Fruits Product Development” project will pave way for the development of Arius as additives for animal feeds and as fertilizer when fermented.

Aside from the economic activities from the tree, the Ivatans see them as a natural shield during natural disasters like storm surges and tsunami as most of trees are naturally growing along the islands’ seashores.

Unconfirmed reports showed lumber from old Arius trees can be made into fine furniture sets and is considered as first class wood, reasons why investors tried, but failed, to commercialize the species.

Just like the Arius, Ivatans will continue to be resilient, sustainable and survivors in a rather hostile environment like Batanes. (PSL/Oliver T. Baccay/PIA-2 Cagayan)