The Banaue Rice Terraces were declared the "8th wonder of the world" with some people calling it a "stairway to heaven".

The United Nations Educational Scientific and Cultural Organization (UNESCO) even included the Banaue Rice Terraces in its list of heritage sites in the world.

There are about 2,000 rice terraces in the mountainous area.

These manually formed steps of rice paddies along the mountain slopes of Ifugao continue to awe people around the world, attracting thousands of local and international tourists, mostly Europeans, all year round.

Banaue Mayor Jerry Dalipog assured that the Banaue Rice Terraces in northern Philippines would not suffer the same fate as that of Boracay Island down south, which is now under a six-month closure and rehabilitation period.

Dalipog said in 2016, the local government and the Department of Health distributed 136 huge plastic septic tanks for the establishments catering to tourists, so wastewater won't be drained into the rivers.

He said results of Banaue local government survey showed that about 30 percent of the establishments operating in Banaue do not have their own septic tanks.

The mayor said private contractors are used to collect the “solid waste” from the septic tanks, to prevent owners from draining their waste into the rivers.

“We do not have a treatment plant in Banaue, that is why we cannot connect the establishments to a town drainage system that will lead to a treatment facility and compost solid waste from residential and accommodation facilities. Hotels here use septic tanks,” Dalipog said. 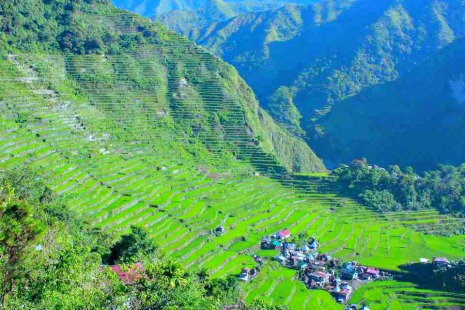 The mayor also mentioned the ongoing construction of a four-storey parking building in Banaue that could accomodate 114 vehicles. The parking structure is a project of the Banaue municipal government.

“Our roads are narrow and there is no parking space in the area," he explained. "That is why we decided to construct a four-storey parking space for the vehicles of the tourists.”

Dapilog said accommodation establishments in the town would also benefit from the upcoming parking structure.

The town's administration, he added, is still looking for other sites for parking purposes to address traffic congestion in the town due to illegal parking on the roadsides.

As for the restoration of damaged terraces in Banaue, Dapilog said, the walking trails are now being fixed for the safety of both the locals and the tourists.

There are about 1,607 rice terraces in Banaue now under restoration with the help of the Department of Public Works and Highways, the Tourism Infrastructure and Enterprise Zone Authority, and private companies and individuals.

Dapilog added the local government is also in the process of constructing potable water lines for the residents and businesses in town, following the establishment of the Banaue Water District.

The water lines, the mayor said, are connected to the water sources as well as to the town's natural water wells, therefore preventing wastage.

With its sloping terrain, drainage is not a problem in Banaue.

“We have no drainage problem here. There is no flooding issue in Banaue,” he said.

Banaue's indigenous families still practice their age-long tradition of maintaining "muyong" or forest areas on top of their terraces.

Dapilog noted such practice not only provides water to the terraces, but serves to conserve the environment as well.

The town folks, also known for their woodcarving skills, do not just cut wood anywhere, according to the mayor.

The Department of Environment and Natural Resources (DENR) declared a selective log ban in Banaue, where locals can only cut trees they planted on their muyongs. (PNA/Liza Agoot)