Philippines celebrates different festivals in almost every part of the country.

People celebrate every festival with superb anticipation and high spirits. Filipinos enjoy every moment when celebrating the festivals.

The event or fiesta is characterized by the community to express the warm welcome of the harvest, express religious fervor, or commemorate a historic event.

Festivities are always supported by the government and Filipinos make sure they participate and enjoy every festivity as a way of preserving the culture and values of being a Filipino.

Tourists from all over the world visit the Philippines to witness the festivities.

The popular festivals are Sinulog in Cebu, Masskara in Bacolod, Ati-atihan in Aklan, Dinagyang in Iloilo, Moriones in Marinduque and many more.

These festivals also portray the culture that is handed down from generation to generation. Visitors around the world feel the unifying power of the fiesta and the Filipino's irrepressibly festive spirit. 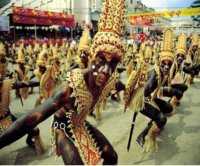 One of the various festivities that has become an attraction not only to local residents but also for tourists is the Ati-Atihan.

The Ati-Atihan Festival is a feast held annually in January in honor of the Santo Niño (Infant Jesus), concluding on the third Sunday, in the island and town of Kalibo, Aklan in the Philippines.

It is considered by many historians as the wildest among Philippine fiestas. Celebrants paint their faces with black soot and wear bright, outlandish and intricate costumes as they dance in revelry during the last three days of this two week-long festival.

The festival consists of tribal dance, music, accompanied by indigenous costumes and weapons, and parade along the street. Christians, and non-Christians observe this day with religious processions.

A 13th century event explains the origins of the festival. A small group of Malay datus, fleeing Borneo, were sold some land by the Ati people, the original inhabitants of Panay Island. The new arrivals celebrated the event at a great feast by painting themselves black to look like them.

Today, Ati-Atihan is celebrated in honor of the Christ Child, the Santo Niño. Three days of parades lead up to the main procession that starts in the church on Sunday afternoon. The parades are colorful and vibrant, much like the Mardi Gras carnival in Brazil. (Jade Sanchez)