On Sunday, the Governor Emmylou Taliño-Mendoza and Makilala Mayor Rudy Caoagdan led the inauguration of the 2.3 -kilometer zip-line in Barangay New Israel, the latest addition to the tourist attractions in the province, the most popular of which is the majestic Mt. Apo, the country’s highest peak.

Taliño-Mendoza hopes that the opening of the zip-line will boost the province’s tourism industry and provide livelihood opportunities to residents in the area.

The zip-line consists of two cable rides. The first ride consists of a one-kilometer stretch from the upper view deck to Sitio San Miguel while the 1.3-km second cable line brings the rider back to New Israel where the tourism center is located.

Ralph Ryan Rafael, provincial tourism focal person, said the North Cotabato’s 2.3-km zip-line exceeds the 1.3-km long zip-line in Bonbon,Butuan City as well as the 840-meter zip-line in Dahilayan, Manolo Fortich, Bukidnon, both considered by the Department of Tourism as the longest in the country and in Asia. 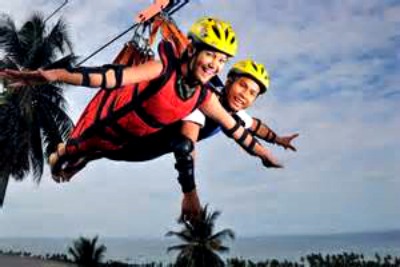 The provincial government allotted P5.8 milllion for the facility. Funds came from the province's share from the Mt. Apo geothermal power plants.

Governor Taliño-Mendoza added that zip-line ride in New Israel is the cheapest in Mindanao; it only costs P200, which already covers the two rides.

Barangay New Israel has been popular as the home of the Moncado group whose members are known for their strict adherence to rules and disciplinary standards set by their leaders, including a ban on smoking.

Monkeys freely roam around the area; at times even tourists could spot deer.

In an earlier interview, Taliño-Mendoza, said the area’s thick forest cover could also be an added attraction, especially among those who seldom see views of green forests.

In the future, she added, the facility could offer other adventures like horseback riding. Amenities like fruit stands and souvenir stores are also being planned.

Makilala as a municipality is known as the “fruit basket” of Region 12 with an abundant supply of durian, marang, rambutan, and many others.

The area is also one of the entry sites for mountaineering adventures who would like to conquer Mt. Apo. (Danilo E. Doguiles-PIA 12 with report from PGO-IDCD)