Ruben Sanchez, chieftain of the Agtas in Nagtipunan town considers himself and his fellow Agtas fortunate for receiving much attention from the government.

"We are thankful to our government for mainstreaming the marginalized sector like the Agta tribe," Sanchez said adding that they would have been wandering from one place to another if not of the help of the government.

Speaking in fluent Tagalog, Sanchez said they thought that they were heading the right way but they realized that they did not prosper because they did not settle in one place.

Sanchez, along with hundreds of the Agta tribe are now settled at Sitio Diuryong, a mountainous part of Dicimungal, Nagtipunan, Quirino, a place they now call their own having received their Certificates of Ancestral Domain Titles (CADTs) from the National Commission on Indigenous Peoples.

The tribal leader is very thankful to the national government through NCIP for giving them a permanent place to live saying that they can now start a new life and work for a better future of their children.

When their place was devastated by typhoons Pedring and Quiel, they sought refuge from the NCIP who referred them to the provincial government and other government and non-government funding institutions for assistance. 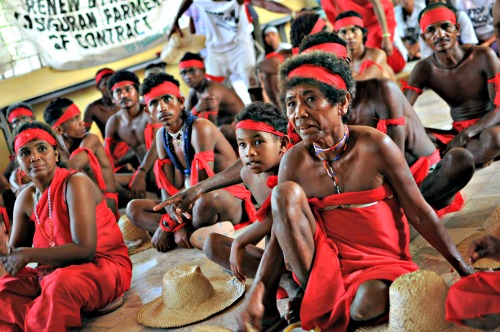 The situation of the Agtas attracted St Francis de Asisi foundation officials who came and assessed their immediate needs.

Assistance poured and the life of the Agtas improved. Besides fixing their homes, they were also given livelihood assistance so that they can recover from their losses due to the typhoons.

Together with the Office of the Congressman and the provincial government and the Department of Education, the Asisi foundation constructed a school, named Diuryong Elementary School, in the community to ease the hardship of the children in hiking for kilometers everyday just to reach the school in Dicimungal proper.

Sanchez recounted that he only finished Grade 1 because of their poor living condition before. We kept on moving from one place to another for a living, he said.

Now that they are already permanently settled in the area and they already have a school for their children, he said that he and his fellow Agta parents will see to it that their children will be properly educated.

Just recently, they held their first graduation and the proud Agta parents witnessed their children march on stage and receive their diploma.

We will take care of our school for we know that the education it brings to our community is very important because it teaches us how to become productive citizens, Sanchez said.

The Agtas want their children to be educated to be able to improve their quality of life and to have a peaceful and progressive community.

Sanchez said that before, they used to stay in abodes with four post and bamboo or leaves as walls. Now, they already know how to construct a durable house, one that can withstand typhoons.

The Agtas also pray that a secondary school be built in the area so the graduates will be able to continue their studies. They are shy and we fear that they won't be able to go to high school, the tribal leader said.

Their dream to have a secondary school in their community can become a reality, with the promise of IP Commissioner Percy Brawner who graced the graduation, to look for additional funds to improve the IP education in the country.(Thelma C. Bicarme-PIA 2, Quirino)