The eruption of Mt. Vulcan Daan in 1870s left Camiguin Philippines an extraordinary, not-to-be-missed tourist attraction site famously known as the “Sunken Cemetery,” marked by a huge cross rising from the waves.

The volcanic fissure and spewing of lava into the sea gained a height of nearly 2,000 feet and submerged areas of Catarman, including the former capitol’s cemetery.

Catarman is the first capital town of the province and the only visible remnants of the old town after the eruption are the ruins of the ancient Spanish San Roque church, a convent, bell tower and the sunken cemetery.

The submerged structures and gravestones of the old cemetery used to be very visible during low tide, before Mt. Vulcan’s second eruption in 1948 which buried the area deeper by 20 feet.

In 1982, a large cross was built on the solidified lava to mark the old gravesite, when it was destroyed by waves over the years, the locals put up another one, actually bigger than the first.

The area is still preserved under sea level and is now viewed by many by taking short boat trips to the big cross where you can get a closer look at the submerged structures which remains visible under clear water.

As the boat makes it way towards the big cross, gravestones covered by corals becomes more noticeable and snorkeling or diving is but the most favorable option to best enjoy the place-to swim in the ruins, see it up close and get the most unique experience it can offer.

Camiguin’s Sunken Cemetery ranks among the world’s top unique dive sites because of its history. Aside from its ruins the water here is also breathtaking. Guests are often mesmerized by its clearness and color. A view deck was likewise built across the marker to accommodate tourist who prefers to glimpse the historic site from afar. 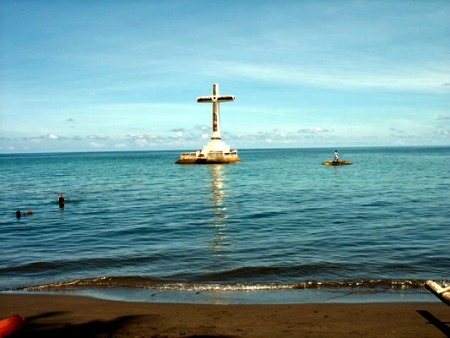 Photo enthusiasts alike will enjoy great sunset shots in this part of the town.

Not far from the deck lie the old church ruins, with its thick walls standing majestically above the sea.

“There is something so chaotic but at the same time beautiful about this volcanic island. Sunken cemetery pretty sums up the beauty,” recalls one of the tourists.

The series of volcanic eruptions wiped out the Spanish settlement which was established in the town way back in 1679, and the remains that we see now, are the only mute witnesses to the wrath of nature.

Aside from its rich ancient remains, the island still has a lot to offer visiting tourists that varies from food, hot and cold spring waters, great beaches and islets, world class dive sites, waterfalls, virgin forests, as well plants and animals endemic in the island.

Light to extreme adventures are all here for the taking of local and foreign tourists who want to explore the tropical island born of fire.

Aside from its impressive tourist spots and rich culture, it is known to the world as the only producer of the sweetest lanzones fruit.

Camiguin also draws a huge crowd every Lenten season, for the religious observance dubbed as “Panaad” or the penitence walk around the island. All throughout the year the island has a lot to offer, from the traditional fiesta celebrations to festivals, it never runs out of extra unique and special treats for its visitors.

Camiguin now ranks among the top destinations in the country assuring an unmatched island experience.

It sits about 10 kilometers off the northern coast of the mainland Mindanao in Misamis Oriental and only 2 hours away from Cagayan de Oro City via fast craft, which plies daily from the island and connecting it to Bohol as well.

Provincial Governor Jurdin Jesus M. Romualdo revealed that by May this year direct flights from Manila straight to the island will be available, bringing the island closer to the world.

“We have lots of special treats to offer here, it’s for the world to discover and experience,” the governor noted. (Jorie C. Valcorza-PIA 10)