Visiting churches is a great way to appreciate local culture and traditions this summer.

But if you do not want to get caught in the exodus from the cities to the provinces or travel a long way, your best bet is the province of Bulacan.

Most Bulacan towns and cities are just an hour drive or commute from Manila, and its churches are some of the oldest and most celebrated in the country. Perhaps the most well-known is the Barasoain Church which is memorialized in history as the site of the Malolos Congress and depicted in the 200 peso bill.

Each of the 21 municipalities and three cities that comprise this Central Luzon province offers several options for the pilgrim who doesn’t want to stray too far from home. The Catholic Diocese of Malolos alone has over a hundred churches throughout Bulacan.

While you’re in the province, don’t forget to experience traditions such as the Obando fertility dance which will happen from May 17 to 19 and the gastronomic offerings that are uniquely Bulakeño like tamales and pastillas.

Here are seven Bulacan churches where you can combine religious tradition with a dash of history and culture before summer comes to a close.

The parish was founded in 1578, making it one of the oldest in the Philippines. The church with its charming façade highlighted by three portals topped with a rose window, interior murals and a bell tower linked to the church by an arch bridge was ravished by typhoons and fires, the most recent was the massive fire in 1949, known as the Great Fire of Meycauayan.

How to get there: From Monumento in Caloocan City, take any bus or jeep bound for McArthur Highway. Get off at Malhacan and take a public transport to the town’s poblacion.

What you should not miss: Aling Tasing’s Original Tamales Pandayan. Tamales is a rice-based dessert topped with salted egg and latik.

2. Our Lady of Assumption Church, Bulakan

Its Moorish elements imported from medieval Spanish architecture and tempered by local artisans differentiate this church from most Bulacan churches. The Mudejar-style detached bell tower and erstwhile front door strikes a balance with its Neo-Byzantine style. According to a historical marker installed by the National Historical Commission of the Philippines, Gregorio del Pilar secretly distributed pamphlets here written by his uncle Marcelo H. del Pilar during the propaganda period against the Spaniards.

How to get there: Take any bus bound for Balagtas, Bulacan.

What you should not miss: Ancestral house of Vicente Enriquez where some of the scenes of the film “Heneral Luna” were shot. 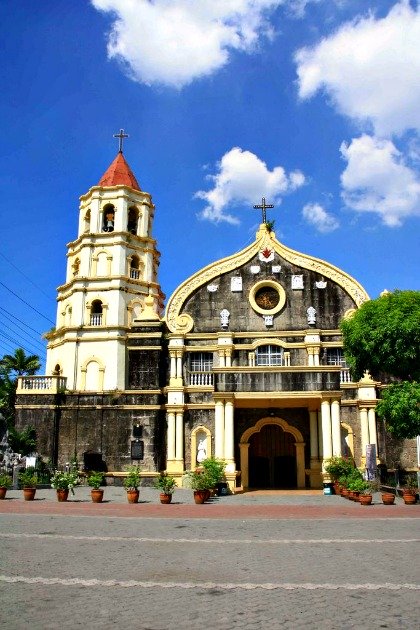 The arch-shaped pediment crowning the façade is hard to miss. It resembles a minaret adorned by a rose window depicting St. James the Apostle. Guarded by a massive five-story bell tower, the church used to be the center of religious gatherings of Bulakeños from San Ildefonso, Baliuag, Bustos and Angat when these towns were still under Quingua (the old name of Plaridel). The church was once used as barracks and army hospital by American soldiers in 1839.

How to get there? Take any bus bound for Nueva Ecija in Quezon City. Get off at Plaridel crossing and ride a jeep going to the town proper.

What you should not miss: Rosa Special Cassava Cake. Made from grated cassava mixed with coconut milk, their cake comes in different mouth-watering flavors.

The ladrillo or brick-clad church is paired with a bulky bell tower. The belfry is capped by a cupola which provides a stunning vista of this border town. Adorned by niches and articulated by Baroque styling, Baliuag Church offers history buffs with a visual fiesta with its exquisitely sculpted canopy or ciborium over the main altar and impressive religious icons in its museum collection.

How to get there? There are buses that ply the Cubao-Baliuag route several times a day in Quezon City.

What you should not miss: Buntal Hat Festival, a 10-day celebration held every May.

Known for hosting the dam which provides water to its southern city neighbors, Angat is also home to one of the oldest churches in Bulacan. Visitors will surely admire the façade but the real treat is inside the church. Its ceiling paintings are often mentioned in the same breath as Sistine Chapel. These lavish frescoes mirrors the Biblical scenes depicted in the Italian version.

How to get there; From Divisoria, you can catch a bus bound for Angat. You can also ride a bus going to Sta. Maria town in Quezon City and then take a jeepney going to Norzagaray. From there, take another jeepney going to Angat.

What you should not miss: Grace Special Espasol. Their espasol, a rice cake made of rice flour cooked in gata or coconut milk, will surely make for a great pasalubong.

If there is one Bulacan church that is steeped in history, Our Lady of Mt. Carmel or Barasoain Church must be it. It was here that the Malolos Congress of the First Philippine Republic met in 1898. A hundred years later, then President Joseph Estrada became the second Philippine president after Aguinaldo to be inaugurated in this church located in the province’s capital. The church was built to serve the needs of parishioners when Barasoain became a separate town from Malolos from 1859 to 1903.

How to get there: Malolos is served by various bus companies and vans plying the Cubao to Malolos route. Get off at Malolos crossing and take a jeepney to Barasoain.

What you should not miss: Mercy’s Original Empanada de Kaliskis. Their flaky empanada is stuffed with chicken and potato filling with a slice of hard-boiled egg.

Made from adobe stones, the church is laid out like a crucifix and a dome caps the intersection. This permits sunlight to bathe the interior crossing and highlight the vibrant murals on the dome and the pendentives supporting it. Located in a hilly portion of the town center, the church belfry can be seen from miles away. The Sta. Maria Church was founded in 1792.

How to get there; Ride a bus bound for Cay Pombo or Garden. Get off at Bocaue Tollgate and take a jeepney going to Poblacion, Sta. Maria.