The National Academy of Science and Technology in the Philippines bestows the title of Academician on deserving resident Filipino people of science.

To acquire this honor, you must have earned high status in diverse scientific and technological processes.

Several of the following 10 Filipino mathematicians have received the title of Academician: 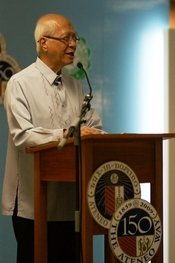 Elected by the National Academy of Science and Technology as an Academician in 1979. He was invaluable in the advancement of mathematics and mathematics education in the Philippines and published information in the field of theoretical physics. Favila has also assisted in writing algebra and trigonometry school texts.

One of the ground-breakers in mathematics in the Philippines, Dr. Favila contributed in an extremely important way to the progression of mathematics and mathematics pedagogy in the country. He created a new kinetic equation and studied geometric inequalities and differential equations with applications to stratifiable congruences, in addition to many other things.

The first Minister of Science of the Philippines, appointed in 1978

Melecio S. Magno has investigated and performed research on rare-earth crystals, how typhoons affect atmospheric ozone distribution, gravitation, radiation in the atmosphere, sky luminosity, and the philosophy of science. The University of the Philippines uses textbooks that were written by him.

Jose A. Marasigan was influential in launching the Philippine Mathematical Olympiad and creating the Program for Excellence in Mathematics. The program at Ateneo de Manila for mathematically gifted high school students was also configured by him.

The PhD programs in mathematics, chemistry, and physics developed by the Consortium of Manila universities were partly founded by him. Schools throughout the Philippines use the Consortium as the center of a network.

In 2003, he was selected to be an Academician, in part for his study of antibodies which potentially have uses in the curative process of specific diseases such as cancer. He has been awarded 14 patents on the utilization of antibodies, and he has a Ph.D in Biophysics.

Tito A. Mijares handled research about multi-variety hypothesis and analysis and the international journal, Annals of Mathematical Statistics, published his findings

As Executive Director of the National Census and Statistics Office and Deputy Director-General of the National Economics Development Authority he has responsibility for statistical systems.

In 2003, he was chosen as a Philippine Academician. Being one of the founders of the Quantum Theory of Turbulence, he has also made fundamental efforts in theoretical physics.

He also researched stellar dynamics, made a new kinetic equation, and revealed that self-gravitation can make a system of structures into one dimension.

He became an Academician in 1990 due to his work on theories on recombinant biotechnology and biophysics, and his development of a model for the inquiry of the structure of RNA/DNA.

Synthetic vaccines were developed due to his contributions.

He was voted in as National Scientist in 1984 and was the director of the Philippine Weather Bureau for 11 years. Previously in 1965 he was recognized with the Presidential Award for his superior achievements in meteorology, astronomy, and physics. His research into soft x-rays have brought him international attention as one of the top 10 Filipino mathematicians.

He is renowned for devising a videophone or "photo phone signal separator network", the Zara Effect or law of electrical kinetic resistance, contributing to novel solar energy systems, and he assisted in the creation of the Marex X-10 robot.

Now that you're familiar with the top 10 Filipino mathematicians, when will your name appear on the list?